Grab It re-examines Monument Valley, one of the biggest indie game hits of 2014, with a fresh perspective. 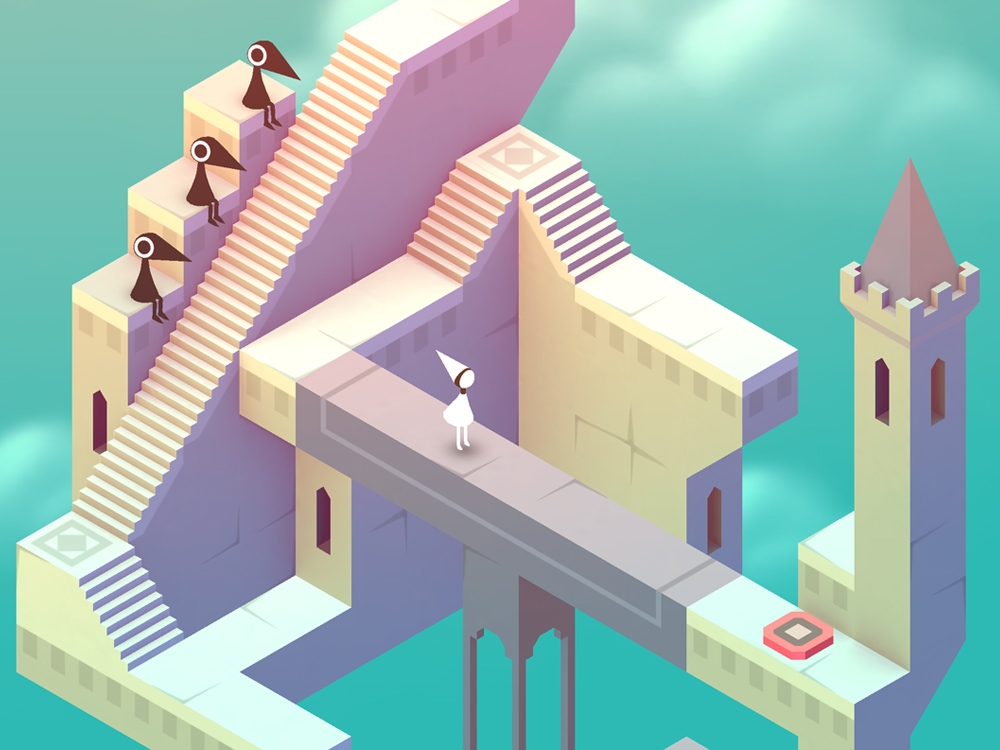 Passive beauty is a tough sell in video games. Games are usually about interaction, after all. A good aesthetic can enhance the enjoyment of exploring a game's world immensely, whether it be descending into the murky depths of BioShock's Rapture, or leaping through the bright and blocky landscape of a Mario title. But the keyword there is enhance, and to bank the majority of a game's appeal on its visual character is a risky venture. Unfortunately for Monument Valley, it is a venture that fails more than it succeeds.

Also Read: Our World Exclusive Making Of Feature in Episode 3 of Grab It.

Monument Valley is a glorified puzzle game in which you navigate a young princess named Ida through a collection of block-based worlds from an isometric point of view, each constructed like an abstract diorama that may or may not obey the regular laws of perspective and geometry. By guiding Ida to switches and manipulating certain parts of the world, usually through sliding or rotation, you enable Ida to progress through those worlds and enjoy brief, enigmatic conversations with an odd spirit that hints at an earlier travesty and other brave adventurers that came before. The story is light and trivial; there is no arc, no conclusion, no closure. Its existence is ultimately forgettable.

The worlds themselves, on the other hand, are anything but. Cascading waterfalls, staircases that defy gravity, magic boxes that open up to different worlds depending on the method used to unlock them. The crisp colours and lush environments caused me to pause and take a breath upon each new level just to admire the scenery. The effect was even more pronounced on the levels that incorporated dynamic animation, such as the aforementioned magic box, or others that gave me the freedom to rotate the world and marvel at its splendour at my leisure. On those, there were quite literally moments where I gasped and smiled, that elusive childish wonder recaptured for a brief moment.

The problem is that those moments are too brief and too infrequent to hold up what is, at its core, a very simple puzzle game. Aside from one or two head-scratchers, the challenges in Monument Valley aren't that, well, challenging. For the most part, the task of directing Ida through each screen requires little more than moving or rotating an obvious platform segment to bridge a previously unpassable gap. The solutions often take advantage of the illusion of perspective in representing three-dimensional scenes in two-dimensions, and there is a definite novelty to that the first few times you do it. But the lustre wears off quickly, and the game attempts little else in the way of interesting mechanics during its stay.

Perhaps, then, it's for the better that its stay is as transient as its puzzles. Clocking in at around an hour or two depending on whether you get hung up on the scant few tricky segments scattered throughout, Monument Valley left me feeling rather short-changed when its credits rolled. Absent of any real challenge, the only satisfaction I gleaned was from those fleeting introductions to each new level. Too few and far between to adequately reward me, I spent a good portion of my time with the game kind of bored, just going through the motions to get to the next level. Boredom is not the emotion I typically ascribe to puzzle games.

Also Read: If You Like Monument Valley Then Read This

Monument Valley is, to me, too pretty for its own good. More a diorama than a dollhouse, it makes a stunning first impression before revealing that there is very little substance beneath its surface. Calling it a puzzle game seems something of a misnomer; perhaps it would be better cast as an exploration game with light puzzle elements. Regardless, my time with Monument Valley was hardly unpleasant, but neither did I come away feeling like I'd accomplished much of anything. Like a toy store display sealed behind thick glass and a “DO NOT TOUCH” sign, Monument Valley keeps its beautiful fantasy just out of reach.

You can check out Monument Valley for yourself here.