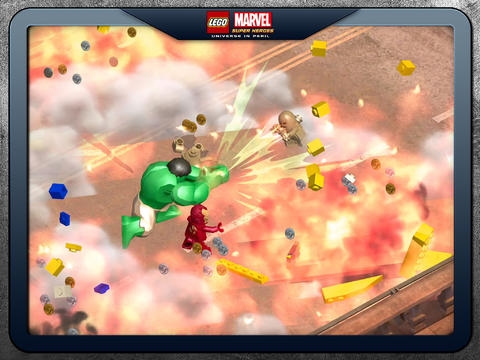 The Lego series requires little introduction; it's become a permanent fixture of the video gaming landscape since Lego Star Wars stormed the charm charts in 2005. In my opinion, developer Traveller's Tales deserves a lot of credit for ensuring a series so primed for stagnation consistently remains fresh and interesting, always adding and building on its template with new ideas and features. To date, the Lego series has transitioned extremely well from console to iOS and this latest instalment is no different.

This spin-off features an "original" story - as original as a story about Loki assembling Earth destroying villains to build a super-weapon can be - and allows you to control 90+ Marvel characters. The gameplay appears to mimic the handheld spin-off of the same name that appeared on 3DS, including open-world exploration, flying, voice-acting and cinematic storytelling. However, a zoomed-back camera and smaller, bite-sized levels show that the game has been tailored for mobile, which is a nice touch.

We haven't been able to test it out yet, but a nasty note at the end of the press release says you can access "power-up abilities through in-app purchases." This sounds scary for a $5 game. That said, early reports are the game is excellent and no IAPs are listed on the App Store - we'll update you on this as we complete our review.

You can check out the game for yourself here.