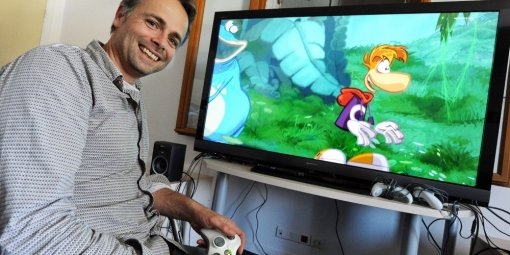 The indie scene is the place to be, whether you're a start-up tinkering away in your (mum's) garage, or - it seems - a distinguished icon of the industry with tens of millions of blockbuster console game sales under your belt. From the creator of Final Fantasy to the creator of Gears of War, the crème of game development talent are one by one removing themselves from the publisher-driven machine and going indie. The latest, Michel Ancel of Ubisoft fame.

Michel is best known for the Rayman series, which he created and has driven for almost two decades. He is also the man behind cult favourite Beyond Good & Evil, and has otherwise been behind the scenes lending his creative voice to other Ubisoft projects. On July 31 he announced his new indie studio will be called Wild Sheep, and has yet to announce any titles.

Interestingly, Ancel will continue to be involved with Ubisoft, contributing (likely as an advisor) to the Rayman series and Beyond Good & Evil 2. While this may seem a little odd, it's not without precedent. Ken Levine, of BioShock fame, recently made it clear his desire to go indie, closing developer Irrational Games and downsizing to a dozen of his favourite coders. However, this new team is still working under publisher Take-2's umbrella. For my money, its suggests that Take 2 would rather let Levine - a truly gifted storyteller and creative force - be an indie in their team, than leave altogether. A move, it would seem, Ubisoft would agree with. That is of course just my speculation. Ubisoft did release a statement, with Ubisoft Annecy, Paris, and Montpellier managing director Xavier Poix saying:

“Ubisoft Montpellier is a hotbed for artistic game development, including great games like Rayman, Beyond Good and Evil, and Valiant Hearts. We are fortunate to have some of the industry’s finest talents, including Michel Ancel, working with us at our studio. In addition to spending some of his time on this new venture, Michel is leading the creative development of select projects at Ubisoft Montpellier, including an extremely ambitious new title that is very close to his and the team’s heart.”

We recommend checking out Ken Levine Jumped Off a Sinking Ship for more on that debate, and those of you thinking about going indie, would do well to listen to the words of Appster CEO Mark McDonald.