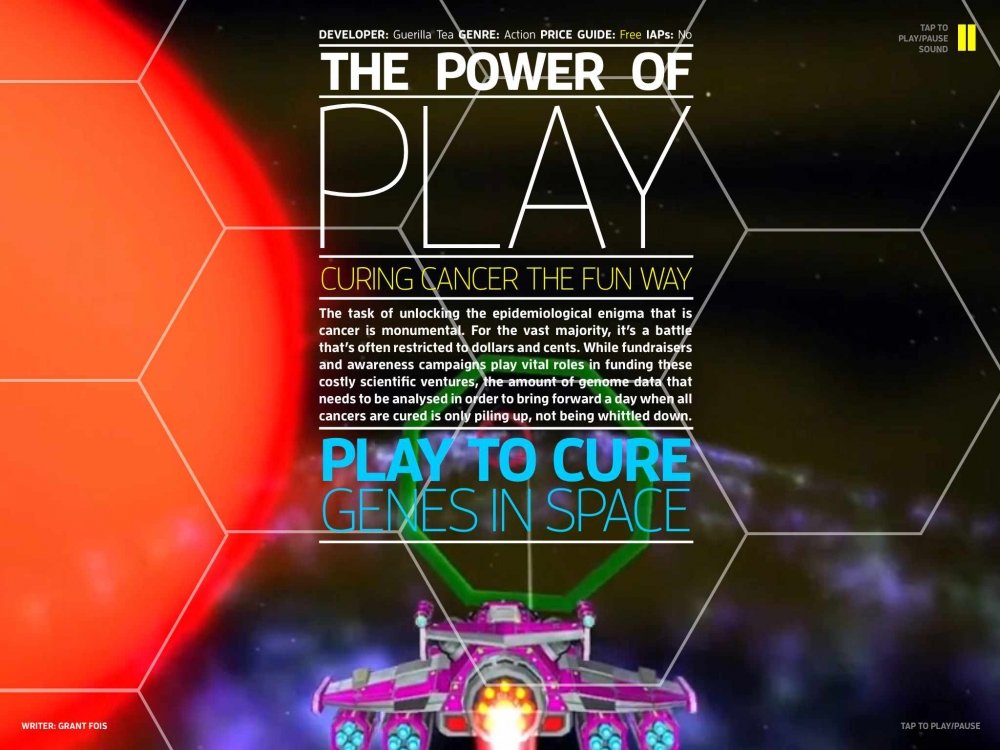 It’s highly unlikely that anyone reading this hasn’t been affected by cancer in same way or another, such is humanity slavery by this most evil of dragons. But did you know that you can help in the fight to defeat this boss of all boss battles by playing a game? The game in question is Play to Cure: Genes in Space.

At its core, Play To Cure: Genes In Space is an opportunity. Developed by Scottish indie studio Guerilla Tea, it’s a game that ultimately transforms the process of analysing genome data from an arduous grind into an activity that’s engaging and accessible to everyone. It essentially allows the player to be directly involved in the fight against cancer without ever stepping foot in the lab. As you blast away at asteroids in this space shooter, you’re literally identifying corrupt data, with the results sent back to the scientists at Cancer Research UK, shaving months and even years from the process. We interviewed Guerilla Tea's chief design officer Charlie Czerkawski for Episode 5 of Grab It, and here is an interesting snippet from that chat:

“There were a lot of things that we simply couldn’t include, as they would damage the accuracy of the data collected. But this is where we hit upon the idea of the modular approach. For example, separating the gameplay into distinct sections allowed us to focus on data accuracy with one section, and then simply add another section with something a little more action-oriented. So we came up with the asteroid field to negotiate to give the player a sense of threat.”

It’s a genuinely free game and one you should download and kill a few spare moments with daily in order to contribute, if even just a little bit, to beating this beast. To find out more about how this revolutionary game was created, iPad owners can read our exclusive interview with developer Guerilla Tea in Episode 5 of Grab It – The Game Discovery App, which includes behind-the-scenes images, sounds and video. Episode 5 also includes eight other exclusive interviews, three features, 15 showcased games and plenty more.

You may also want to check out our related opinion piece, When a game is about more than just pure entertainment, how should it be judged?

References:
- Play to Cure: Genes in Space
- Grab It Episode 5