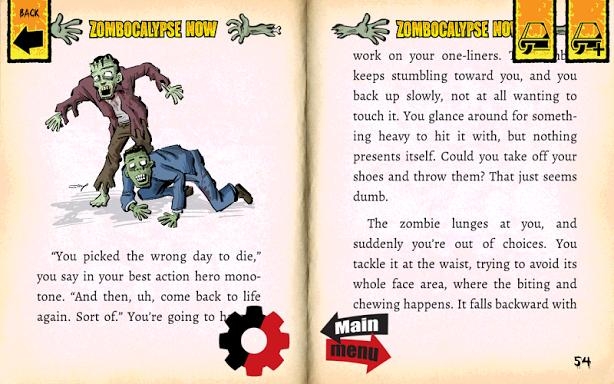 Note: We have just released episode 6 of our game discovery app, Grab It, featuring not only the Top 10 Gamebooks on iPad, but also an exclusive feature with genre legends Tin Man Games on how it has reinvigorated the genre for the digital generation. You may also want to check out Grab It's website for all manner of articles related to gamebooks as part of our self-declared Gamebook Month.

A huge part of my childhood was captured by the magic of choose-your-own adventure novels. I cherish the countless hours spent under my blankets exploring the stories of mysterious assassins, powerful dragons and wicked enemies. After playing Zombocalypse Now, I was joyed by how it brought back those wonderful memories. Zombocalypse Now represents the very best of the old school choose-your-own adventure experience, updated for a modern audience.

To be fair, this is what gamebook developer Tin Man Games excels at, having got its craft down to a fine polish. The Australian studio has been prolific in recent years, bringing dozens of gamebook adventures based on classic choose-your-own adventure novels to life. For those familiar with the team’s output, Zombocalypse Now marks a significant, but refreshing, departure from its previous work. Moving away from the dark fantasy of its Fighting Fantasy remakes to something best described as a comedic horror.

Based on the novel by Matt Youngmark, Zombocalypse Now follows the hilarious exploits of a stuffed bunny during the zombie apocalypse. Yes, you read that correctly. For those unfamiliar with the choose-your-own adventure format, Zombocalypse Now plays out as novel where you choose from a number of potential branching story pathways. The interface is clean and simple, and there is a helpful bookmarking system to save your progress.

Like its fluffy and sarcastic protagonist, Zombocalypse Now is stuffed to the brim with incredibly funny and wacky situations. Matt Youngmark certainly has a natural flair for sharp and witty writing, which left me roaring in laughter from the very first page. If you find the prospect of mafia figures with a fetish for the Brady Bunch, zombie polar bears and even an ending with a dolphin apocalypse funny, then you’re in good company. I’m not sure whether everyone will appreciate Youngmark's humour to the same extent, but it certainly gave my funny bone a good tickle.

Anyone who has read a choose-your-own adventure knows the beauty of systematically working through the branching storylines to see every possible ending. Zombocalpyse Now doesn’t disappoint offering over 100 possible endings to unearth, at least seven in which you don’t die in some hilarious fashion. But the main problem I found was that it quickly became difficult to keep track of the story pathways I had followed. Knowing I had to manually keep track of my progress slightly dulled my excitement. I would have loved it if Tin Man Games had offered some automatic tracking system, similar to that found in Banshee’s Last Cry. Not only would this have been a fairly simple inclusion, it gives the player far more incentive to keep reading to experience the various endings.

A core philosophy of Tin Man Games is to give nostalgic readers of choose-your-own adventure novels something new and fresh, and to bring an exciting experience to those unfamiliar with the genre. On all fronts, Tin Man Games has knocked this one out of the park. For new and old fans alike, Zombocalypse Now is the perfect title to showcase the choose-your-own adventure genre.