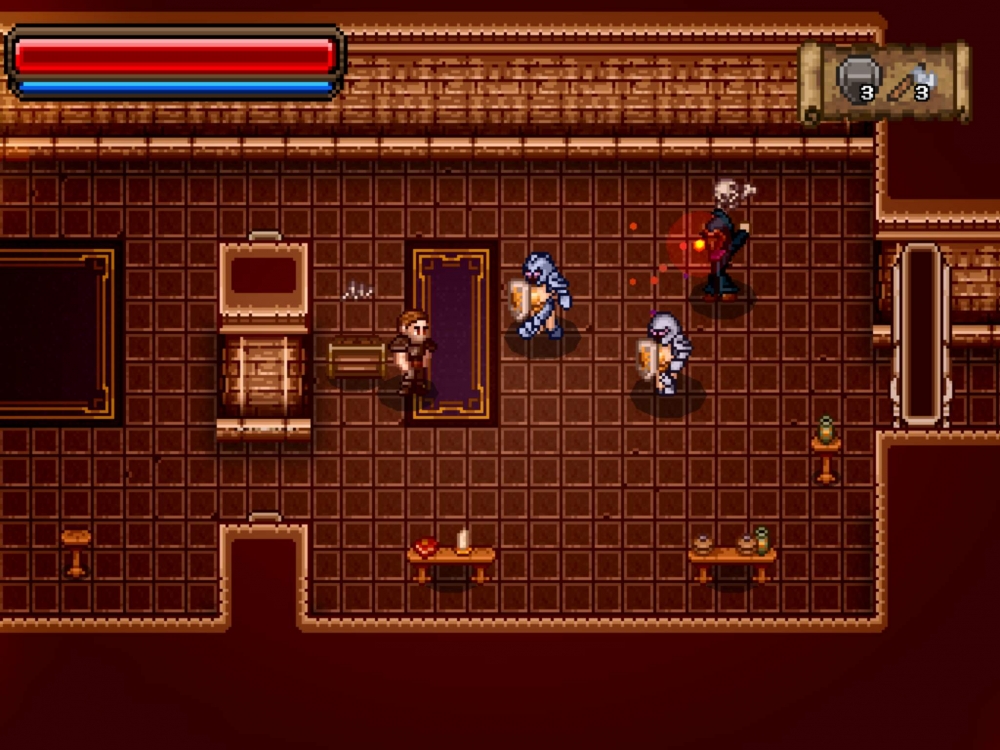 I’m a big fan of roguelikes and it’s been enjoyable watching one of my favourite genres receive such a run of polished titles in recent years. Wayward Souls follows the top-down, 2D, permadeath hack ‘n’ slashing that has remained the genre’s template for decades – think Cardinal Quest, Hoplite, 100 Rogues and developer RocketCat Games’ own Mage Gauntlet. It’s a game filled with challenge and retro fun, despite occasional control issues.

Wayward Souls wastes no time getting you up to speed. You start with powerful weapons and items, which eases you through the basic mechanics while introducing enough backstory and understanding to set you on your journey proper. The control scheme is simple enough - movement via a virtual thumbstick, taps for basic attacks, holds for power attacks and swipes for special abilities. Just when you feel you’ve grasped the fundamental mechanics, however, you’re inescapably killed and reminded not to feel too entitled.

Repeated death is both a defining element of the game and the entire roguelike genre, it also brings to light Wayward Souls’ most significant flaw. Death often comes unexpectedly due to the system’s difficulties discerning between regular attacks and special abilities rather than player mistakes. Not being able to control combat due to confusing mechanics becomes a noticeable annoyance, and cheapens the value of using death as a prominent aspect of the game by reducing the value in the risk-reward style of gameplay that defines it.

While the controls are occasionally frustrating, the other aspects of the game design make up for it through their brilliant execution. Every playable class feels noticeably different from its peers, complemented by unique character models and associated backstories to enhance their individuality. As you uncover the motivations for each character, it adds depth and diversity to the experience, and I constantly found myself curious as to what my character was doing crawling through the dark dungeons of a haunted magical tower.

Corrupted miners, orc shamans and strange frog people are just a small list of the occupants of Wayward Souls’ eerie setting, yet never feel out of place. As you unravel the game’s mysterious narrative, you begin to feel a measure of sympathy for your opponents, a curious spin on the tale usually told in this genre.

Encounters begin as desperate scrabbles to avoid magical blasts and flailing pickaxes - leaving you barely able to scratch opponents in the wake of their ferocious attacks - before transforming into skilfully planned duels as you begin to master your class strengths. Each enemy generally has only one or two specific attacks, but will use them relentlessly, leading to a surprising amount of tactical depth and diversity when different combinations appear. Upgrades help with this, allowing you to make decisions on how you want to modify your fighting style based on personal preference. It’s extremely rewarding to destroy hordes of enemies with expert timing and good tactics, and the game will constantly add harder and more powerful foes to test your strategic limits.

The art design is superb, too, with its 16-bit retro vibe perfectly suited to a dungeon crawling atmosphere, further complemented by randomly generated levels that keep you on your toes. The wonderfully ominous electronic soundtrack is layered on top, creating a pitch-perfect finish to round out a very immersive experience.

Wayward Souls blend of action and mystery is a compelling mix that instils a sense of determined curiosity every time I pick it up for another round of dungeon crawling. Players that enjoy RPGs and action games will find the challenge, tactical depth and intrigue-laden plot and characters highly rewarding, however a measure of patience is recommended.