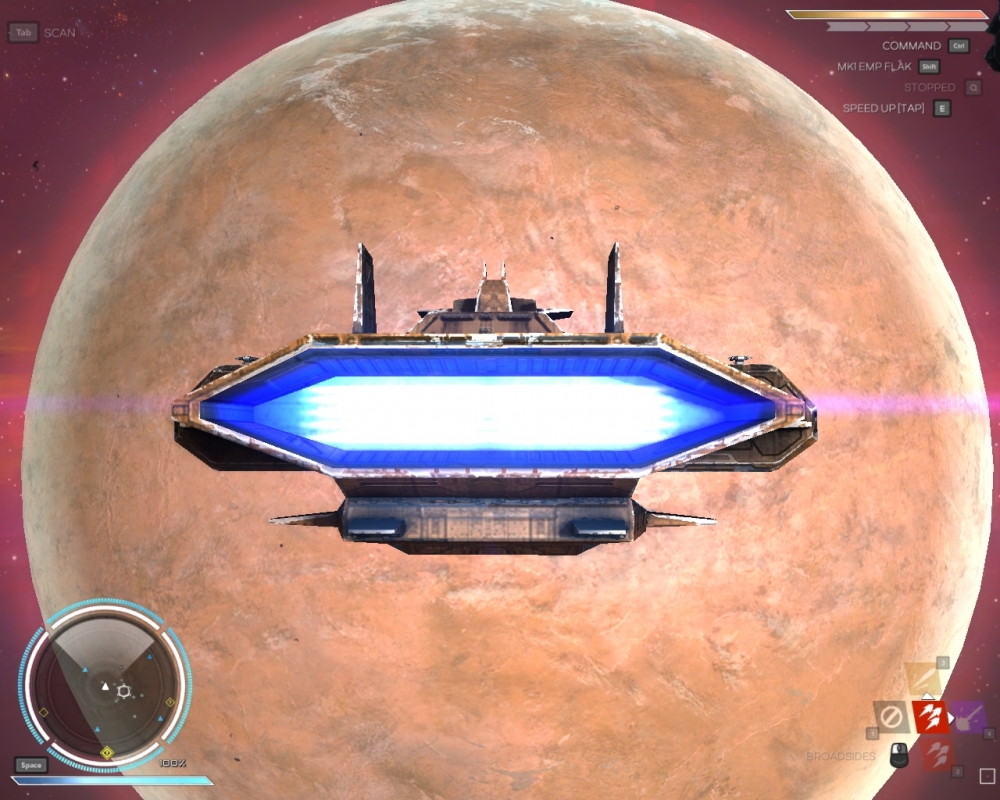 The setup is simple: your roguish aunt bequeaths you her old ship and asks you to meet with her urgently. Things don't go exactly to plan, and pretty soon you're making friends with backstabbing aliens and amnesic AIs. It's an intriguing tale with a solid voice cast and competent writing, but it's not the game's main draw. Where Rebel Galaxy shines is in its engaging loop of stellar swashbuckling. Tracking down bounties, punching through trade blockades, scouting nebulae and mining asteroids: the randomly generated missions provide plenty of variety as you steadily build your fortune. Rebel Galaxy's combat adopts the naval approach, sharing many similarities with Assassin's Creed IV: Black Flag. Broadside cannons pack the meanest punch, but they have limited range and operate on a cooldown. Turrets have greater aiming arcs and can fire much faster, but deal less damage and are prone to overheating. Both weapon types come in numerous variations that enable drastically different strategies: lasers for shield penetration, missile bombardments for hull damage, EMP flak cannons for disabling enemy weapons - the options are extensive.

What might seem a little odd at first is the way Rebel Galaxy handles space flight. Movement takes place on a single horizontal plane, meaning no pitching, no yawing, no crazy corkscrews or loony loop-de-loops. On the surface it sounds restrictive, but it doesn't take long for the system to prove its worth. In the heat of battle, you've got enough on your plate cycling through your turrets, broadsides, deflector shields and boosters, all the while repositioning your ship to disperse enemy fire across the separate sections of your shields. Having to deal with an extra dimension on top of that would be overwhelming.

A single plane of movement makes even more sense when playing with a controller - the recommended control method, according to Double Damage. And even without a third dimension, the hectic action retains plenty of strategy. Careful timing of your deflector shields will see you shrug off a swarm of missiles before tearing down the enemy's shields with your pulsars, boosting after them as they try to flee, then pulling alongside them and dowsing them in hot laser. The ripping explosion at the end is just the icing on the cake. There are a lot of ships to acquire in Rebel Galaxy and each feels appreciably different from the others. Some are swifter, some buffed by bigger shields, and some come packed with an arsenal that would put the Death Star to shame. The ship you start with is no slouch, but before you even make it out of the game's first galaxy, you'll have access to craft that dwarf it like a whale does a trout. And, if you're like me, you'll spend a good long while salivating over your new purchase after exiting the dock, feasting your eyes upon the augmented arsenal you now have at your command.

The ship design is top notch. You can't customise them, unfortunately, but what's there is plenty good enough. Sleek corvettes look appropriately sinister, while hulking dreadnaughts are intimidating enough to have you shaking in your space boots. Depending on the ship, you'll have an array of turret placements at your disposal. Especially with the larger vessels, the choice of which turrets to install where makes a big difference to your battle strategy. Maybe you want to load your prow up with shield-stripping lasers, bum-rush the enemy, then turn and flee while the missile launchers on your stern pummel your foes into oblivion? Or maybe you'd prefer a cluster of mine-layers, an explosive surprise for the ships foolish enough to take the bait and chase you down? The breadth of options offers something for all tastes.

Particular praise has to go to Rebel Galaxy's soundtrack. It mixes Old-West rockabilly with hard rock; one minute you're calmly drifting through warp space to the tune of a twanging guitar, the next a ripping solo kicks in as you're yanked back into real space by a cabal of cargo-stealing bandits. The Firefly influences are unmistakable, but you won't see me complaining.

You probably won't be blown away by the overall visual fidelity, however. The graphics are sharp without dropping jaws, and they capture the vastness of space effectively. Electronically-charged nebulae and flaring stars look suitably magnificent, and the characters you meet all have a pleasant cartoony style to them. That tone also extends to the hilariously over-dramatic death cries of vanquished foes. 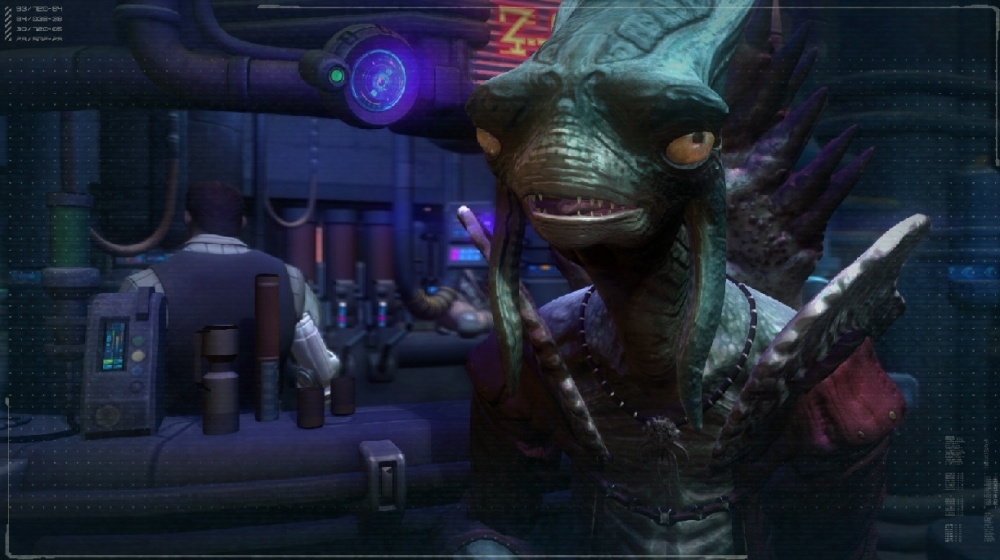 Don't let its friendly appearance fool you, though: Rebel Galaxy is deep. Really deep. Procedurally-generated galaxies offer up countless planets to explore, asteroid belts to mine and dangerous bounties to hunt down. Guilds and factions vie for your favour, each with their own assortment of missions to complete and unique ships to buy. Galactic trade is a game unto itself without being overly complex: clear and concise price charts along with a thriving rumour mill enable those of us without an economics degree to make a tidy sum on the galactic market. An ever-more tantalising catalogue of ships urges you to risk it all on the most challenging contracts - or turn your coat and start smuggling contraband for quick, dirty credits.

For a long time, one game has held a special place in my heart for being the closest thing to the Han Solo experience I've always wanted. Freelancer, released back in 2003 by veterans of the classic Wing Commander series, consumed many, many hours of my life. It was my definitive space adventure - until now, that is. Rebel Galaxy is everything Freelancer was, but better. It's an incredible achievement given the size of the team behind it. Double Damage consists of just two guys: Travis Baldree and Erich Schaefer, previously of Runic Games, the studio responsible for the Torchlight series. They didn't work entirely alone - they hired art and music contractors to assist them - but for the most part, Rebel Galaxy is their child. They deserve to be proud.

It might be streamlined in many ways, but Rebel Galaxy is far from shallow. It nails the balance between accessibility and complexity, foregoing expensive joysticks and convoluted docking procedures for the raw thrill of rocketing through space. For everyone who prefers Solo to Skywalker, this game is for you.

Now, if you'll excuse me, I have to go show some space-rats the importance of shooting first.

Rebel Galaxy is available October 20th on Steam, Xbox One, and PS4.