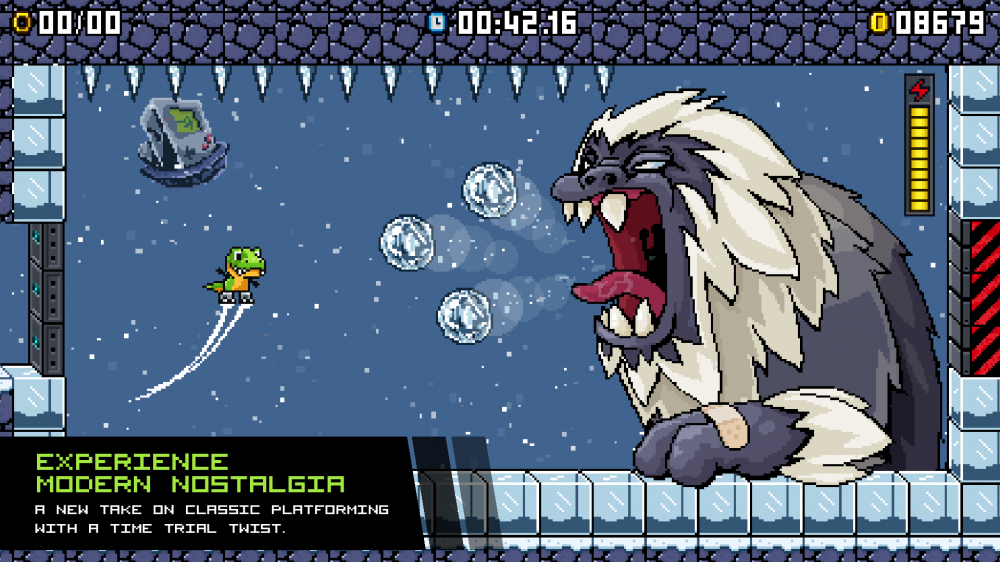 It’s no secret that we’re a big fan of indie developer Treefortress Games here at Grab It. Their debut game, the tower defence x RPG adventure Bardbarian, is an absolute blast and one that belongs on every iPad. You can read our full review in Episode 4 of Grab It. Bardbarian’s release, however, wasn’t without its share of controversy.

The developer has bounced back strongly from these concerns, all the more smarter and wiser from its time with Bardbarian. And with these lessons tucked firmly under its belt, we can now look forward to Treefortress’ newest game, the 2D platforming adventure JumpJet Rex.

In the words of the developer, JumpJet Rex is a “punishing old school 2D platformer with a time-trial twist.” Citing inspiration from games such as Mario, Megaman and Trials HD, Treefortress’ goal is to appeal to those of us who love the old-school platformers of the late 80s and early 90s, while adding a fresh coat of modern paint.

That sounds intriguing enough, but the cherry on top of this delicious icecream is that players take control of a T-Rex with extraterrestial jump boots. Day one purchase right here!

Fortunately, we don’t have to wait to get our hands on the title. Treefortress recently brought JumpJet Rex to Steam Early Access, if you’re keen to give it a whirl. The game will remain in Early Access for around 10-12 weeks, enough time for the dev to gather and integrate player feedback. You can pick up the game for $9.99 now (which contains a free copy to gift to a friend,) and represents around 35 per cent of the final game.

At full retail release, the game will be available on Windows, OS X and Linux for $14.99. The final version will contain more levels, bosses, a co-op mode and a whole bunch of customisation options. Treefortress has also shared its desire to bring PlayStation, Xbox and Nintendo fans into the fold very soon after its initial release.

Already, JumpJet Rex is shaping up to be an incredibly fun, challenging and slightly wacky take on the retro 2D platformer. Taking the time to gather and incorporate player feedback via Steam Early Access is a smart move, especially after the debacle surrounding Bardbarian. Now if you’ll excuse me, I have some extraterrestial jump boots to strap on to my T-Rex.