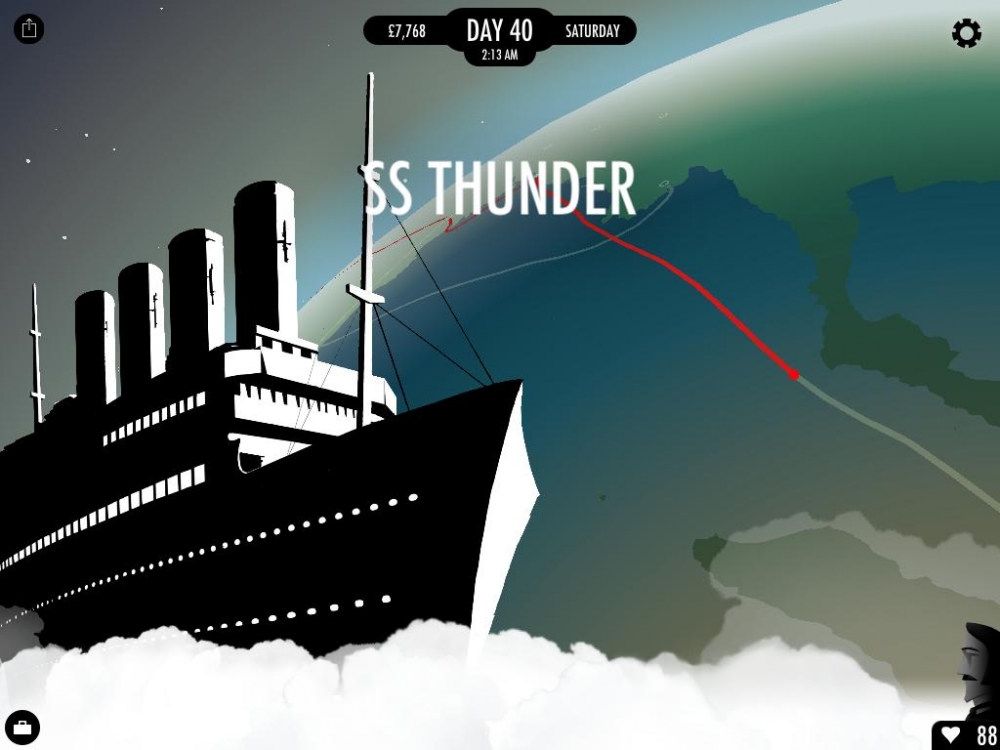 We recently caught up with Jon Ingold (creative director) and Meg Jayanth (writer) from gamebook developer inkle to chat about their recent title 80 Days (be sure to read our review) and to shoot the breeze about gamebooks in general. Enjoy.

How did the idea come about to turn Jules Verne's masterpiece, Around The World In 80 Days, into a gamebook?
Jon:
The biggest problem in interactive storytelling is making the player feel like their choices really matter; that they make a difference. Which is weird in a way because in any other kind of game, from chess and poker to an endless runner, players don't normally question that their actions matter; it's simple, everything they do affects what happens next. But for some reason, when people make choices in a story, they seem to believe that because that choice moved things forward, then it must have been the only way forward.

So the big design problem is, how do you make an interactive narrative in which the player knows, for certain, that their choices make a difference? One way you can do it is via UI (such as in The Walking Dead where "Clementine will remember that.") But what we did with Sorcery! and on a massive scale with 80 Days is to use a map. The player explores the map as though moving across a game-board and they can see their choices in the route they took.

So we were looking for stories we could tell that are all about maps and exploration. The idea of 80 Days was a clear winner - it let us bring together a strong, well-written narrative with the map-based exploration that gets our game design senses tingling. And, of course, the setting is fantastic: add a touch of steampunk and it's a world that's crying out to be explored (especially when the steampunk is as cool as what Meg's created here.)

Is there something about that book in particular that works well as a gamebook?
Jon:
We were drawn to 80 Days for several reasons - it's an adventure with a simple hook, but with a huge scope for possibilities; it's naturally episodic, going from place to place. And a lot of the basic gameplay ideas - racing against the clock and managing your funds and luggage - are right there in the original material.

But best of all, at its heart is this relationship between master and manservant, so we can get both great characters and a sense of rollocking adventure!

You've said publicly what a massive undertaking this project was: what was the most challenging aspect of turning this novel into an experience that modern readers can relate to and understand? And how did you overcome that?
Meg:
When you think about the Victorians now, when you think about steampunk, it's often with a sense of nostalgia. But when Verne wrote his novel, it wasn't nostalgic - it was exciting, challenging and a vision of a technologically-driven future. We tried to stay true to that sense in creating 80 Days - it's a modern fantasy of an imagined past rather than a replication of Victorian values. We talk about this a bit on our blog; we called it "Victorian Futurism." That sense of relevance and excitement informs everything about 80 Days - everything from the alternate history we created to the gorgeous Art Deco art style and illustrations.

That was really the challenging part, because when you get down to it, the Victorians weren't all repressed, cigar-smoking English gentlemen (though Fogg might dearly wish they were!) The people you meet in 80 Days are very human - the situations they're in might be historical or fantastical, but their desires, their ambitions, the stories they pull you into, are hopefully entirely relatable.

As I was playing 80 Days, the thing that stuck with me the most was the people I met in my travels. The stories they tell and the conversations you have add incredible depth, which simply begs for multiple playthroughs - what are you favourite destinations in the game and why?
Meg:
This is such a tough one! Paris was the last city I wrote and I love it because I felt so conversant with the structure and format of the game by that point. The World's Fair is going on, and it's a sprawling, lovely taste of what the rest of the game is like - and if you play through more than once, there's a big chunk of Passepartout's backstory during the 1871 Prussian siege of Paris that's unlocked. But I'm also going to cheat and say Rangoon because of the encounter that you have with the city's, ah, "protector" which hints at all sorts of technological and political manoeuvrings in the region.

Jon: For me, my favourite moment was when I arrived in Khartoum for the first time, just as the sun was rising between the ruined stone pillars - our art style is simple and stylish, but still manages moments of beauty! In terms of story-content, though, it's got to be Reykjavik, where we've hidden one heck of an easter egg...

What do you think Verne would have thought of having people experience his novel for the very first time in this fashion?
Meg:
Once the sheer wonder of playing with an iPad for the first time wore off, you mean? The game is so different - 80 Days is almost more a conversation than a proper adaptation. It draws on the inventions and worlds of Verne's other books as well - particularly Five Weeks in a Balloon and Twenty Thousand Leagues Under the Sea - and spans over 150 cities compared to Verne's seven or eight. But I hope he'd see the love for his work there. Verne embraced new technology and loved stories and that's what 80 Days is all about.

In addition to 80 Days, you've also transformed Mary Shelley's classic monster tale, Frankenstein, into a gamebook. Do you think gamebooks can be a way to connect a new generation of people to literary classics?
Jon:
I'll be honest - no, not really; literary classics are classic. If you want to experience them, you should pick them up and read them. Some may take a little work to get into as language has changed over the years, but that's part of why you should read them. An old, great book is a way to immerse yourself somewhere in the past.

We've used 80 Days as our inspiration less because we think people should go and read Verne and more because we read Verne and it inspired us. The same kind of thinking lies behind our Sorcery! series as well; it's adapted from a gamebook series, but it isn't a port. It's a reimagining, driven by the way those books inspired us as kids.

Who knows what our next original project will be? It might be inspired by literature, but there's plenty of other great sources out there in the world. It'll be fun finding out.

If you could choose any other literary classic and turn it into a gamebook, what would (or will) it be?
Meg: I'd love to do a time-travelling, gender-bending sprawling version of Virginia Woolf's Orlando. Or Nights at the Circus by Angela Carter. Though both of those books are so perfect it would be terrifying.

Jon: T.H. White wrote an awesome version of the King Arthur epic called the Once and Future King. Personally, I'd love to do the story of Arthur in a weird, Excalibur-ish way. Though I'm not sure what we'd do with players who don't pull the sword from the stone!

If you enjoyed our interview with inkle, be sure to read our review of 80 Days – one of the most exciting and immersive gamebook experiences on the market.

As part of Gamebook Month, also be sure to check Episode 6 of Grab It, which features a huge feature on gamebook maestros Tin Man Games, as well as the Top 10 Gamebooks on iPad.