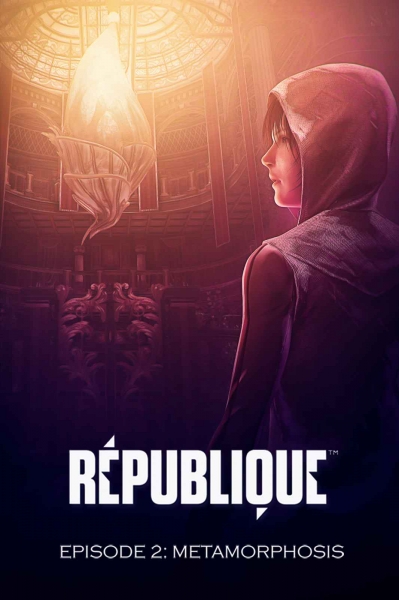 République is a very important game for us here at Grab It. It graced the cover of the very first ever episode of our game discovery app. We featured a massive in-depth Making Of with developer Camouflaj, alongside a stack of other content in what was (and remains) our free launch experience – grab it for $0 from the App Store now.

But there’s more to it than that.

It also proved to be an inspiration. A game developed by the ex-creative director of Halo 4, who quit the “dream job” to form an indie studio, battle through the financial trenches and ultimately deliver a game of such quality, innovation and fun that it reset expectations of what could be achieved in a touchscreen game. It can’t be a fluke that we found, in our launch feature, a title that reflects the same journey and aspirations of Grab It.

Thankfully, République as an experience is far from done. Just a tickle over five months since the release of its first instalment, Exordium, episode 2 is set to launch on May 1. Subtitled Metamorphosis, it will continue Hope’s journey to escape the totalitarian state that holds her captive for the purpose of experimentation. It will also continue the one-touch, console-like stealth experience that blew our mind. Here is the official comment on what fans can look forward to:

"Episode 2: Metamorphosis explores the origins of intellectual fascism through the player’s continuing efforts to help a young woman named Hope escape an Orwellian prison. Amid growing intrigue and ever-more-dire consequences, she seeks out the librarian, Señor Luis Octavo (voiced by Marcelo Tubert), a sympathetic mentor whose concern for Hope makes him a target of The Overseer’s wrath. This second instalment is both action-oriented and contemplative as the veil over Hope’s eyes is lifted. With the player’s help, she gains a better understanding of her captors and the desperate measures necessary if she is to free herself. At the heart of the experience is the airy, moonlit library – a labyrinthine environment that spans over 13,000 square feet."

We caught up with Camouflaj founder Ryan Payton to find out what fans can expect, and scored some assets from the new episode to boot. And of course, if you have yet to dive into the République world, grab it now and bring yourself up to speed – if you like titles such as BioShock and Thief, you’ll love it.

You’ve been quite transparent and open about the challenges, mistakes and victories you faced getting République: Exordium to ship: how has the reaction to the game changed the way you reflect on those two years of prior development?
The positive reaction to EP1 was far beyond what any of us expected. After grinding away on the game for over two years, I really started to lose perspective. One thing I did understand, however, was that we had something unique on our hands, and by that token, we were going to get a lot of attention from the type of critics and gamers I associate myself with – folks who want to see developers tackle new challenges. EP1 was evaluated (as it should be) from all angles and I think held up well to the scrutiny, even though it’s really just the first of five big République releases.

How has the mood changed in the studio since the successful launch and how do you think that has impacted the game’s quality bar and depth?
One of the most important things I did during the development of EP2 was write a lengthy postmortem on EP1 for Gamasutra – it really forced me to consider all the strengths and weaknesses of our team, culture and processes. Looking back, what I observed was a team that overcame countless challenges to finally get a high quality product on the App Store, which is no small feat.

With EP2, the team’s demeanor has definitely changed. Camouflaj in 2014 is a lot wiser, more confident, but still hungry. Things don’t surprise us like they used to. On the negative side, I think team members got nervous because of the overall relaxed atmosphere during the development of EP2, especially when things were really broken. That fear ended up being unwarranted, however, as we really banded together in the final stretch. It reminded me how scrappy and agile Camouflaj is.

What did you see as the main things from Episode 1 you had to improve and iterate on for Episode 2?
For us, EP1 will always be a work-in-progress – it’s the entryway for all our players and has such a heavy burden from a gameplay tutorialisation and narrative setup perspective. With the release of EP2, we went back to EP1 and made dozens of improvements to the pilot episode including better optimization for older iOS devices, smarter Hope cover and the integration of our new map mode.

It’s my goal to continue to update EP1 with every upcoming major release. In fact, we’re putting a smart strike team on further EP1 improvements next week. We can’t just let it be!

The cliffhanger in Episode 1 was an epic tease: do you think it worked to your advantage to be that sharp with your cliff and how has the fan reaction to that (and desire for answers) influenced the story in Episode 2?
I’m such a fanboy of our EP1 cliffhanger, and it’s really something that only came together at the last minute thanks to Herculean efforts from our writer Brendan Murphy and sound guy David Liu. It’s pure magic, and the player response to it has been exactly what we were hoping for.

One of the narrative challenges we’re tackling is telling the game “24”-style as a real-time narrative. So the cool thing is that EP2 picks up right where EP1 left off, and we’ll also pay-off the cliffhanger of EP2 with the start of the third episode…

What teasers can you offer about Hope’s journey through this episode in terms of how she’ll develop as a character, and what we’ll learn about her world?
One of the critiques of EP1 that we took to heart was that there was a lot of moving parts to the story that were hard to track. We had to do that to setup our complete narrative, but with EP2 we knew we could focus the writing on a single narrative – Hope’s journey through the massive Metamorphosis library in search of Señor Octavo, the librarian. What unravels is a cerebral mystery with a heavy focus on exploration and puzzles and absolutely spine-chilling writing from Brendan. He really upped his game with EP2.

Have you added any specific new gameplay mechanics or features you can detail?
This will sound like PR speak, but we really outdid ourselves with the second episode. Instead of just telling the next chapter in Hope and the player’s story, we’ve added way too many new features. Our ambitions ended up being a heavy burden for our development team these past four months, including a new 3D map, new OMNI abilities, three new puzzles and my favourite new feature: the ARC Prizrak – it really adds a lot to the survival-horror feel of the game. I’m obviously nervous how EP2 will review, but we’re batting a thousand with our playtesters – they all universally prefer EP2 over the pilot episode.

I loved the game cartridge collection idea – will it be back? If so, how have you found developer involvement in the idea this time around?
The game cartridge idea is one of our most popular features and is back with a vengeance in EP2. More so than EP1 we went with a certain theme to all the iOS games we’re featuring – keep an eye out for that.

It has been over five months since Episode 1 came out: was that always the intended timeline and if not, how and why did things change?
Coming out of our year-end break, I really wanted to ship EP2 in late March, but that just wasn’t possible. We’re now operating under the assumption that we can release new episodes every four months, which many folks on our team still think is very aggressive. EP3 is the episode that worries me the most – it’s another huge undertaking that doesn’t have the benefit of being our former vertical slice like EP2 was. Wish us luck!

Somewhat off-topic, but I would love to get your thoughts on Hitman Go! As someone who has proved just how capable a traditional console-like stealth game can be on a touchscreen, how do you feel about a company the size of Square Enix shying away from giving stealth gaming a good go?
I’ve only got to the first few missions of Hitman Go! and I liked what I played. EP2 took over my life in March and April, which is tragic because I want to play more Hitman Go!, Monument Valley and, of course, Dark Souls II…

République EP2: Metamorphosis will appear as an IAP within the current République App, which you can download now from here. We’ll go live with our review as soon as we can - in the interim check out six new screens here.