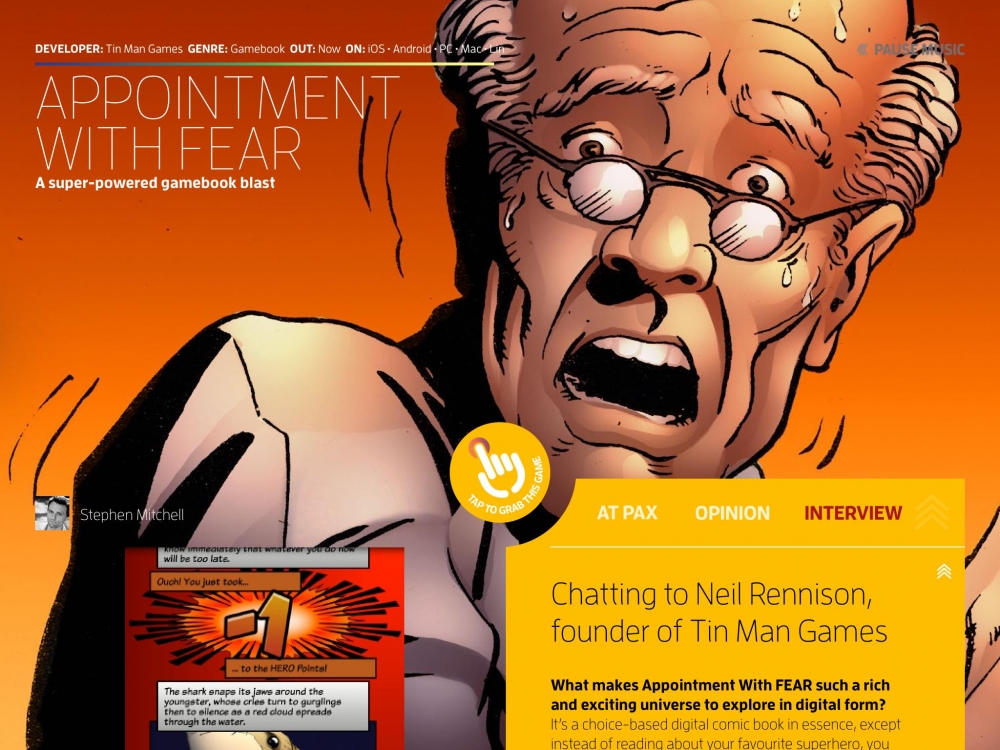 With PAX AUS only days away from flinging open its door to hordes of excited patrons, there is an infectious buzz in the air of Melbourne, Australia. Going hands-on with some of the biggest and brightest indie games has left us humbled at the talent on display.

One of the games you’ll be able to get some play time with is the digital gamebook Appointment With FEAR from Tin Man Games. It's yet another adaptation of the legendary Steve Jackson Fighting Fantasy series, however it carries a completely different tone. Think less sword and sorcery romp, and more superhero beat-em-up with a dynamic comic book aesthetic.

Being such a radical departure from the usual Fighting Fantasy gamebooks was what made it stand out to the team at Tin Man Games. Co-founder, Neil Rennison, had this to Grab It for our feature article in Episode 8:

“Being superheroes set within a large comic book city, it simply cried out for a bit of a digital makeover. With tablet-based comics being in vogue, we thought it would be a great idea to actually make it feel more like a digital comic, complete with slide-on panels and avatars with speech bubbles, rather than walls of text narrative found in the old paperbacks.”

If you’ve ever thought that doing a mere adaptation of a physical gamebook cuts down on the workload, think again. Appointment With FEAR may be one of the complex projects Tin Man Games has ever undertaken.

“This was certainly our most challenging Fighting Fantasy title yet,” reflected Rennison. “We always have to perform some element of re-writing or logic re-wiring whenever we convert a gamebook to digital, but with Appointment With FEAR, we had to completely re-write every section and had to add a lot of extra content too!”

If you want to read more of our exclusive interview with Rennison, be sure to download our PAX AUS Indie Game Guide. Even better it’s free for a limited time!

You might also be interested in reading our full review of the game, which we called an accessible, light-hearted and wonderful introduction to the world of digital gamebooks. We also have a massive interactive digital making of feature with Tin Man Games in Episode 6 of Grab It, including our Top 10 Digital Gamebooks.

Finally, Appointment With FEAR is out right now, so you can grab it here.