The tutorial lays out this story wonderfully, and I would love to see some more single player scenarios delve deeper into this rich kingdom, as narrative takes a bit of a back seat in the multiplayer. It also does a decent job of blunting the game’s steep-ish learning curve. Given Armello mixes together quite a few elements from different genres, there’s a bit to digest before you’re let loose on the gameplay.

Predominantly, Armello feels like it’s somewhere between a turn-based board game and a collectible card game, where your focus can be easily spread between combat, espionage and exploration.

There are four ways to win a game; you can win by storming the castle by force. You can wait for The King to die of Rot and take his place by having the highest prestige level at that time. You can cure the king by collecting spirit stones that appear randomly across the map. Or you can gain a higher Rot level than The King and overthrow him as the new dark lord.

The intrigue starts at hero selection; there are bears, wolves, rabbits and rats, and each of them has stats and skills that help in one aspect or another of the game. You can have up to four players involved in an online match, and as with most board games, multiplayer is at the game’s heart.

After choosing heroes you are dropped into a hex-based map, similar to the most recent Civilisation titles, where each spot is surrounded by six others. Each tile is different; a plain, mountain, forest, swamp, town or castle. Each of these then affects how you play and what moves you make. Mountains take two moves to get over, for example, but provide more defence. Whereas controlling a town gives you a steady income, but they’re hotly contested and so on. 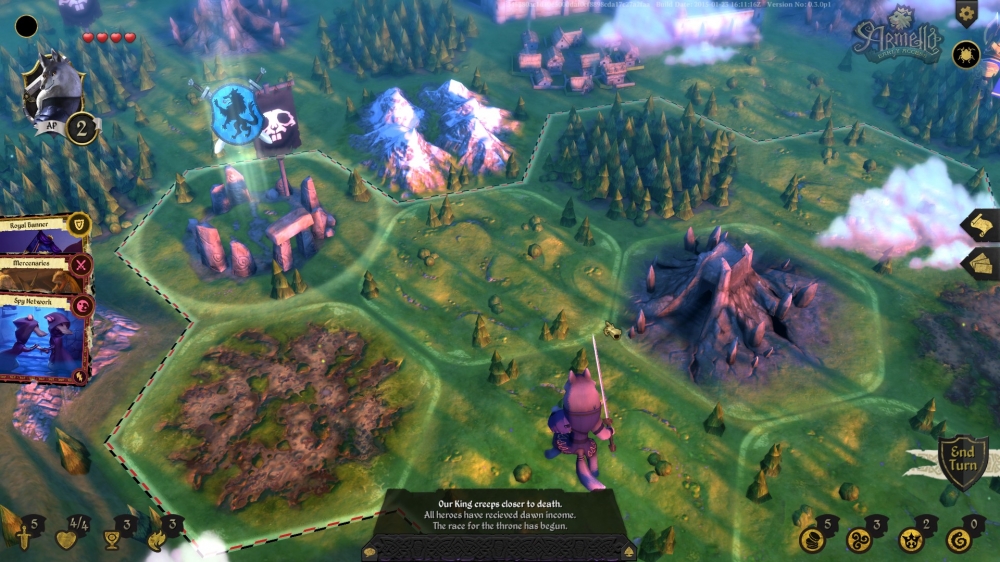 Each player on the field is given objectives by their clan that help you collect loot and prestige, as well as spells to help you on the board or in combat. Spells and loot are all cards that you have on the side of the screen, and can be played during your go or an opponent’s turn. You could strike an enemy with lightning, or block off a tile with the cheekily named “Game of Thorns” card. These cards are all beautifully designed and slightly animated to give them a feeling of motion without constantly moving around on the screen. Hovering over the image actually gives you the name and signature of the artist, which was a nice touch.

When an encounter occurs, combat unfolds as a little game of dice, where each player roles for defence, offence and other stats that determine if they win or lose. The combat animations are great and feel full of imagination.

I think the element of the game I most loved was The King himself, and his guards. They add a wonderful element of randomness to the proceedings that can really throw off your plans. Every morning The King lets out a decree that affects everyone in the game, and the impact can be huge. The player with the most prestige can influence The King's decision as well, giving some ongoing bonus to holding the leader position. Simple decrees could be that everyone pays a tax to The King of two magic points, and if they don't have it he will take one prestige instead. Later ones can be more diabolical, such as replacing the King’s Guard with Dragons. They are not very friendly.

My only big gripes with Armello all fall into the multiplayer side of the game, and mostly come down to the fact that it doesn't encourage as much player interaction as I would like. Players are given objectives and goals that are scattered across the map, and completing these will earn you prestige and cards, but the fact that everyone is playing for different objectives mean that you sometimes spend more time running circles around the map than trying to undercut or overthrow other players.

I feel like this feeds into my second issue; there isn't much in the way of communication options. Much like Hearthstone, Armello gives you preset phrases to throw out during the game, but no chat window or voice options. If I were playing this at home on a real game board with friends, it would be spectacular forging alliances and betraying each other, but the lack of communication means that waiting for other players to make their turn can be slow at best, agonising at worst.

I did really enjoy my time with Armello; it brilliantly modernises the board game. But I couldn't shake the feeling that I wanted to play it at home with friends on a real board with pizza and beer, which is why it is my current pick for the best LAN-party game of the year.