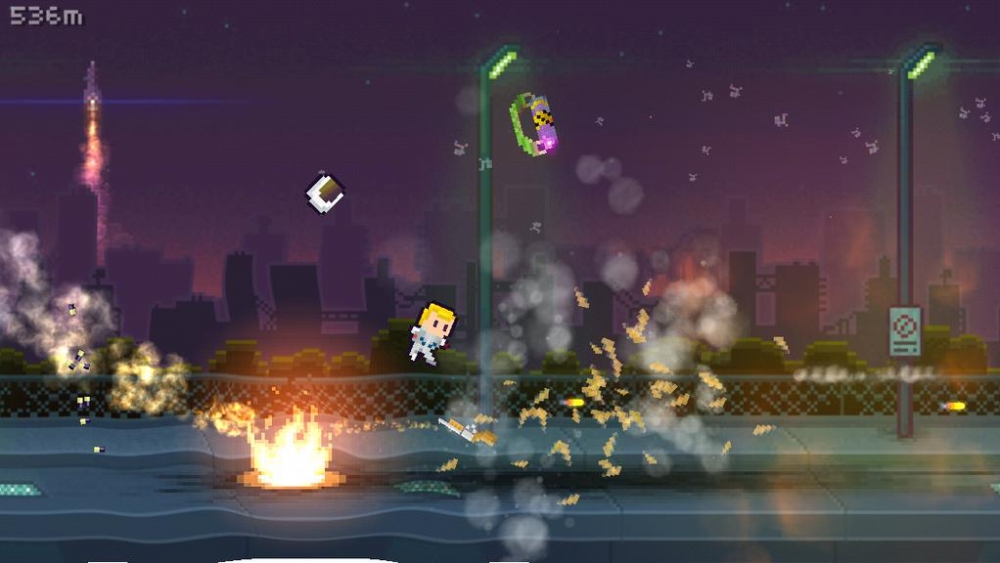 It’s an indie developer fairy tale. Having fallen in love with Super Mario Bros. in their childhood, two gamers dream of one day making their own games. It’s not easy, and it takes time. They learn to code, and over a two year period in the hours sandwiched between full-time jobs, a dream slowly materialises into a reality, and a game is made.

This alone would have been a happy enough ending, just simply finishing what they started. But the fairy tale ending for this story is that on its App Store release, the game gets a front page slot in the Best New Games section. The two guys are Darrin Henein and Stephan Leroux, their game is Lastronaut, and it’s a lot of fun.

On its release, Henein posted a thoughtful blog - which is well worth a read - calling Lastronaut a “love-letter to an industry.” It’s completely free with no ads or in-app-purchases, essentially serving as a notice of arrival and putting their chops on display.

Henein and Leroux have taken recognisable tropes from other success stories and mashed them together to create a charming little auto-runner. The controls will be familiar to anyone who’s played Halfbrick’s classic Monster Dash - left side of the screen for jumping, right to shoot - whilst the weapon system is pure Super Crate Box. Players will start each run with a random weapon that gets replaced each time a floating crate comes along. You won’t know what the replacement is, so if you’re happy with your current weapon you have the choice not to hit the crate. There is a nice selection of weapons too, such as a laser that auto-aims but has a slight lag before it powers up - making timing all-important - and a flamethrower with great destructive ability, but a shorter range.

The visuals come in the form of lovingly hand-made pixel art similar in the style to Capybara’s Super Time Force, as opposed to its Superbrothers: Sword & Sworcery EP. Think ‘80s action movies, not art films.

Speaking of ‘80s action movies, Lastronaut’s story might sound familiar - humanity gets its arse kicked after inventing sentient humanoid robots. Where have we heard that one before? You play as the last human on Earth, running to reach the rocket ship that’ll save your life. After everyone else has already left, I guess someone had to stay to shut the door behind them.

I never thought I’d say this but it would actually be great to see Lastronaut monetised with some weapons and/or outfits for your runner. It’s a game begging for more content, as it doesn’t take long until you feel like you’ve seen everything it has to offer. Also, it would be nice to see the developers compensated for their efforts.

Lastronaut won’t gain points for originality, but the end package has all its disparate influences tied together so charmingly, it's a compliment to this auto-running love-letter, and Henein and Leroux should be proud of their accomplishment.