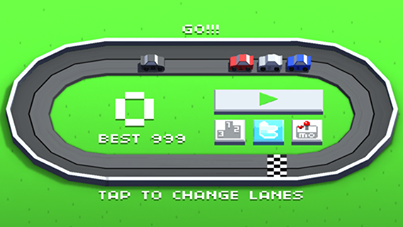 Jared Bailey - operating as developer Nocanwin - is about to release what he says on his Facebook page is to be the "first of many micro games."

The teaser trailer embedded below doesn't show much in the way of gameplay - hilariously so - but it seems like it might be a game of avoidance as you travel the wrong way around a race track, changing lanes to dodge oncoming vehicles.

We're fans of Bailey's Cubed series of games - especially the series' iconic art style - and it will be fun to see what the prolific developer has up his sleeve for future "micro games."

We did a retrospective of Bailey's work back in February just before the release of Cubed Snowboarding. Check out the trailer below for Wrong Way Racing and you can click on the links to grab any of his previous games, all of which offer simple, retro fun.