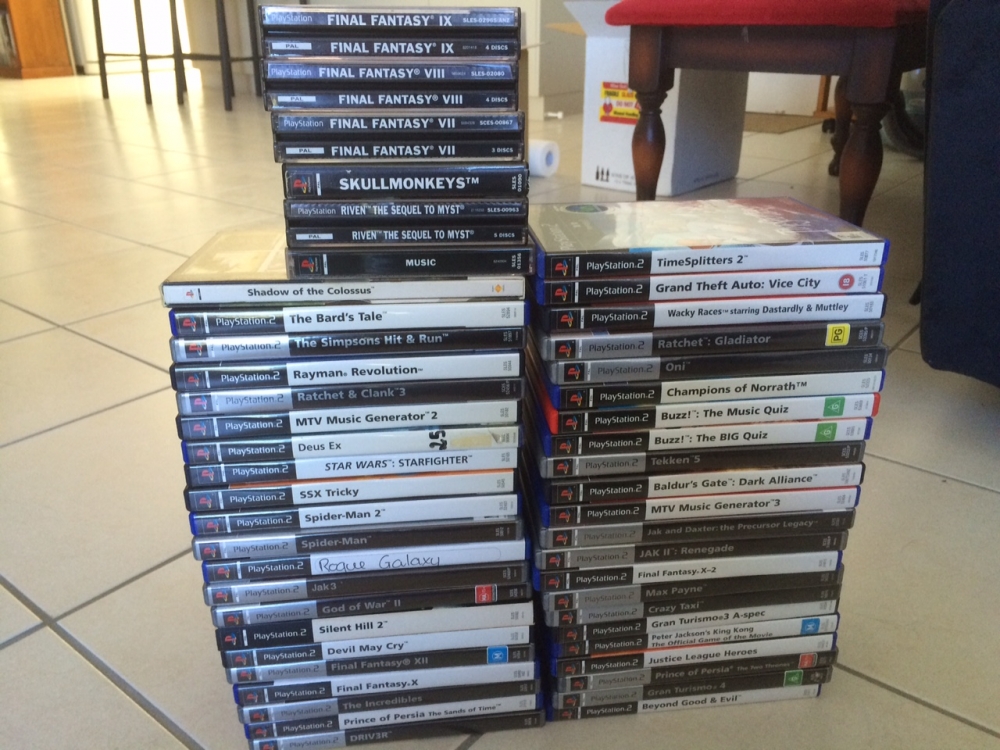 Moving house is a great time for reflection. You’ll end up handling things that mean a lot to you, even though you haven’t seen those things for years. And while you may only see those artefacts every Olympiad or so, the reverence with which you touch them, and the smile they bring to your face will mean they will get placed in yet another box, labeled, and transported carefully to your next residence. Once there you’ll find another corner of another dark cupboard where these treasures will be safe.

The PSone and PS2 games pictured above are for me such treasures, and even though I no longer even own a PSone or a PS2, I can’t bring myself to get rid of them.

Believe me, I’m not a hoarder. I’m not even particularly sentimental. I don’t have shelves full of figurines or collector’s edition box sets - not that there’s anything wrong with that - I’m just not that way inclined. Many of my previous console’s games have long since been traded in or become landfill, but the ones pictured above are more like photo albums. Each for various reasons carry specific memories with details that go beyond my experiencing them as simple games that I’ve finished.

I remember in DRIV3R, the first time I ran my car off a bridge and into the water, sitting for minutes thinking that what I was staring at was a “Game Over” screen. After a while I jiggled the left thumb stick and the black blob floating in the water moved accordingly. What? I jiggled again, the blob moved again. Trust me, there was a time when avatars did not know how to swim, and discovering it for myself first hand was nothing short of a revelation.

Looking back it’s kind of embarrassing to think that when my father first visited me in my new apartment, the only thing I thought to show him was the photorealistic graphics of Gran Turismo 3 A-spec. Photorealistic? They were nothing short of fantastic for their time, but photorealistic those visuals were not.

It goes without saying that I can’t throw out my boxed copy of Final Fantasy VII (or VIII, IX, X, X-2 or XII). The television I played it on in a preceding apartment was a hand-me-down from my parents, and it was big. Not big in screen size, just big in general - that thing was a piece of furniture. Housed in a timber cabinet it had a great flat top on which my pipe collection proudly sat in its wooden pipe holder, which was of course carved in the shape of a pipe. My couch consisted of huge big pillows lined up against the wall facing the TV, and I was Cloud for dozens of hours between the Autumn of ’98 through to late Spring.

I could go on; postcards from my gaming past.

FPS, for example, has never really been my bag, but TimeSplitters 2 - wow!

Living by myself and playing Silent Hill 2 in the middle of the night with all the lights off, scared shitless.

Playing Buzz!: The Music Quiz with my then girlfriend (now my wife) with its crazy little game show buzzer peripherals - she’d kick my arse every time, but in my defence, eighties pop music (which the game seemed to major in) was never really my bag either.

And Shadow of the Colossus. Felling those beautifully conceived creatures and feeling the weight - and guilt - of their deaths as my actions vanquished them from their fictional world. The Last Guardian sure has a lot to live up to.

So you get the idea. This box of games for which I no longer have the appropriate consoles on which to play them will travel with me like a photo album. I have no interest in replacing my long since departed PSone or PS2, which I could easily do. I’m too busy finding enough time to keep up with modern classics such as The Witcher 3: Wild Hunt. I know that one day I’ll dig out CD Projekt Red’s current masterpiece, unfold the paper map inside the vanilla edition’s box, and think about the apartment I played it in, and the times that I had there.

The great games that define genres, and are spoken of in decades afterwards, are great because they are not just a diversion from our real life, but an integral part of our enjoyment of real life.