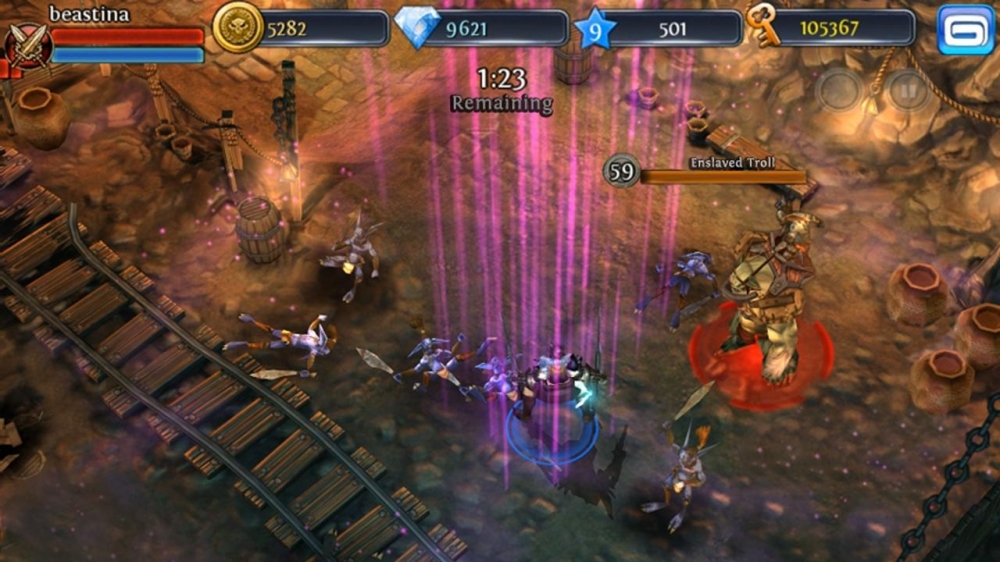 I'm not a Gameloft hater; I'm a lover of good games - and there's a big difference. As they say, let the haters hate; plus I'm far too vain to allow myself to get lost in that sort of crowd.

So with that out of the way, let's get on to the main task at hand. Originally I was planning to start this review by comparing Dungeon Hunter 5 to a beautifully ornate treasure chest - such as the ones found in-game at the end of a successful mission; or the ones you can spend various hard earned currencies on opening - and asking readers to join me on a journey to discover what treasures, if any, lay inside. But if you glance back at that subtitle above, you'll see that I've shown my hand far too early to make good on any such contrivance, so I'll just dive straight in.

With the Dungeon Hunter series starting out as a paid and half-decent mobile option for action-RPG fans, the switch to free-to-play in the third entry was a telling sign of the times. There are some great free-to-play models - Hearthstone: Heroes of Warcraft is a brilliant example - but DH5 feels like an evolution that's culminated in a very functional and efficient skeleton; one devoid of any real meat, and designed with a very obvious purpose in mind.

The first couple of levels will guide players through a tutorial of all the lovely, shiny things at their disposal. Shiny is definitely one thing Gameloft does well, and DH5 is a great looking game. But before too long, more currencies than those found on the Foreign Exchange will need to be worried about, grinded for, saved and spent, forcing gameplay and story into supporting roles.

Missions are bite-sized five minute romps, and after three or four I was skipping through the preceding vocals and text explaining the justification for your bounty hunter's adventures, as they all started to blend into one another.

It's not all bad. Loot drops depicted as cards are a nice touch - and a sign of Gameloft trying to tap into the current zeitgeist - while the mechanics by which your loot is Fused and Evolved would work admirably in an RPG with more depth. Weapons and armour can be sold, but not bought in the game’s shop. Rather than selling unwanted loot though, players can fuse items together to level them up, and once their level cap is reached, they can be evolved once again with items that are rarer drops, or earned in daily dungeons. It’s an interesting system, but as with every aspect of DH5 it feels as though it is tweaked towards corralling players to grind, rather than enhancing the gameplay.

The base-building and raiding that make up the online social component of this entry is yet another reminder of Gameloft trying to keep its finger on the pulse. Minions earned through the single player missions can be placed on your board in set positions, and once again Fused and Evolved, strengthening them against would be raiders. It's fun at first, but quickly becomes a repetitive gameplay loop, much the same as the single player missions that play out the same way each time, yet must be revisited for any hope of advancement. And by revisited I mean grinding, as about seven or so missions in, players will hit a noticeable difficulty spike that is hard to progress past without replaying earlier missions to level-up.

It's evident that Gameloft has in its ranks the talent necessary to craft an epic, rich action-RPG - and I'd dearly like to see the development team do just that - but DH5 is not that game. There's certainly excellent examples of those on iOS, and players after such adventures would do well to grab Iesabel or Battleheart Legacy and forget this title. You’ll revel in their beautifully visualised, rich fantasy worlds with well thought-out mechanics, but won’t once feel as though those games are playing you.