In the App Store notes for Ammo Pigs, you’ll read; “Ammo Pigs looks and plays like a DOS game, complete with VGA style graphics. It is a post-apocalyptic pig fantasy ripped out of the 90s shareware era.”

Based on this description, it’s clear Cascadia Games is going straight for the nostalgic jugular with its latest title. Nostalgia is a great starting point, but as we all know, without substance to give it strength, nostalgia alone is a shaky foundation on which to build a lasting and memorable game. So DOS, VGA and 90s shareware aside, is there enough substance to save Ammo Pigs from being mere App Store cannon fodder?

In our interview last year with Chris Jorgensen - Cascadia’s owner - we asked for his take on why the visual styles of the platforms of yesteryear seem to resonate so well on iOS, to which Jorgensen replied;

“Demographics, primarily. There are a lot of iOS users that are in their 30s, give or take a few years. We all grew up on Nintendo, Sega and MS-DOS games. Retro-style games tap into the nostalgia for our childhoods.

To a lesser extent, I think “simple” games work well on mobile devices. Game sessions are shorter so the gameplay can’t be too deep or have too steep of a learning curve. That fits nicely with “retro” game genres from the 80s and early 90s, which tended to be simple or ports of arcade games that had similar requirements. The pixel graphics almost are a subconscious trigger for players, setting up expectations that the gameplay will fall into one classic genre or another.”

This pretty much sums up Ammo Pigs. 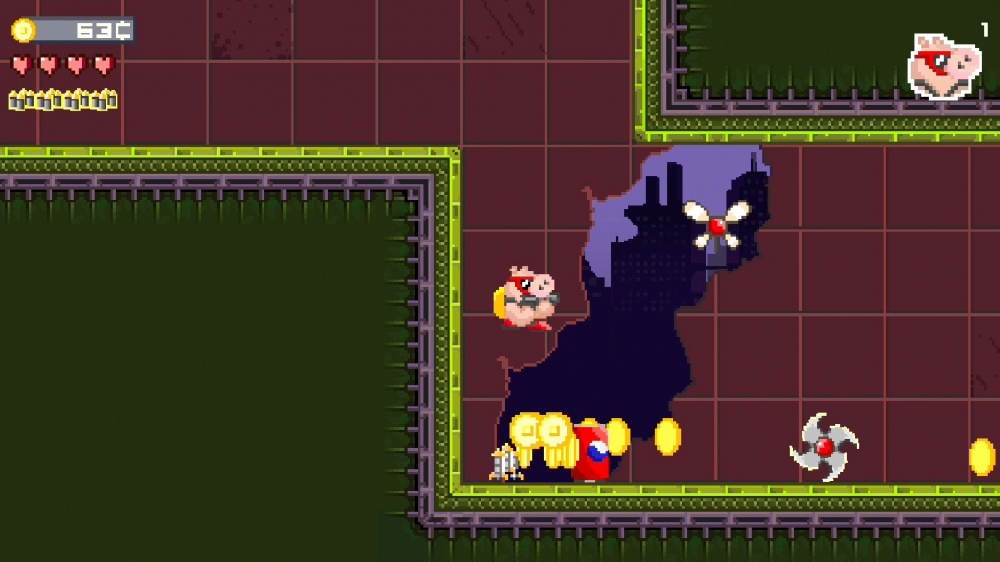 The chip-tune soundtrack and the pixel graphics are a perfect representation of gaming as it was. There is even a nice little cutscene to kick things off, which speaks to the current self-aware Hollywood trend of world weary action heroes getting back down to business, Expendables style. The scene depicts our washed up hog reluctantly enticed away from the barstool he looks to have been inhabiting for far too long, and back to doing what he does best - shooting stuff.

For the first three or four levels of Ammo Pigs, there is enough to see and do to keep the player’s attention from straying. The controls do what they should, there is a fun variety of enemies to shoot, and there are some challenging platforming obstacles to navigate. Moving past these initial few levels is still fun, however there isn’t much introduced afterwards that you haven’t already seen.

Yet the game’s total length of twelve levels feels like a fair proposition for the money you’ll spend, and there is not an IAP in sight. Had the game gone on for longer, I would have really needed more variety to hold my interest - as it stands, Ammo Pigs only just outstays its welcome. On a slight tangent, I actually really liked that Ammo Pigs showed me right from the very start how many levels there were to complete, and I wish more games would do this. It’s nice to have that end goal in sight, and helps to organise your gaming time if you don’t have a lot of it.

Cascadia’s previous title - 2-bit Cowboy - felt to me like a much fuller, complete and polished experience (and you can read our full review in Grab It Episode #5, along with an exclusive making of interview with Jorgensen). Whilst Ammo Pigs didn’t quite reach its predecessor's high water mark, it is still a fun romp worth getting off your barstool for... just not for too long.