Grab It had the opportunity to attend a behind closed doors Skylanders: SuperChargers demonstration prior to the official announcement, and this is some of the fine points we learned.

No doubt by the time you read this, the first previews for Skylanders: SuperChargers will be spreading across the Internet like a virus, infecting kids with a deep-seated desire to add to their toys-to-life collection, and cured only by open and deep parental wallets. As long as they’re having fun, right? And SuperChargers looks like great fun. Every journo would have seen the same demonstration, which gets the over 300 heroes now available to players behind the wheel of 20 vehicles (a mix of land, sea and air) in sectioned-off areas of the Skylands that facilitate such gameplay. High speeds, tricks, combat, pick-ups… although it's much more than a Mario Kart clone. It offers vehicular puzzle-solving, large arena-based boss battles and on-the-fly car modification all from the driver’s seat.

As mentioned, everyone saw the same demo, but I thought I would share 16 insights I picked up from talking with Activision’s representatives on the day to help deepen your understanding of the game.

Also Read: Are Warner Bros. and Batman Just Cashing In On Clash of Clans?

1. There will be 20 vehicles made available for the game, but they will not all be available at launch. They will be drip-fed in waves over the course of the coming year, alongside their driver (a new character, or a supercharged re-imagining of a fan favourite with new abilities and weapons). At the time of writing, only one vehicle is understood to be available at launch, and that is Hot Streak; a race car. For the sake of being able to complete the entire game from the get-go, we can assume at least one vehicle from the air and water categories will be read at launch, and they surely be the announced Dive Bomber and Sky Slicer.

2. The game will play in co-op as with previous iterations, however this will not translate to two vehicles on-screen at the same time during those vehicle sections of the game. Instead, one player will become the driver, and the other will be tasked with taking down threats.

3. Voice actor Patrick Warburton returns. I did not see his character Flynn in-game at any point, but his deep baritone voice was omnipresent, guiding the player through the level by offering insights and tips into your surroundings.

4. When you are in the air-based vehicles, you aren’t quite on-rails, but you also don’t have free reign. The craft will continue to push forward regardless of whether you accelerate, although you can alter the speed between slow and fast. You have freedom within the flight corridor to move around, but you can’t just fly off into the ether to see what you can find. It’s not open-world.

5. The spectacular wave effects that light up the water-based sections are more than just eye-candy. They will change the momentum of your craft and also its height, so can become a key part of your combat strategy. You can time jumps of peaks to get high, or roll down faces to gain extra speed. It looks excellent, too.

6. Yes, you can use the Giants characters in the game and yes they can squeeze their big butts into the vehicles. We were not shown how this will be visualised, but each possible combination of character and vehicle has its own “getting in” animation – which must have been a painstaking process – and we’ll look forward to seeing how they’ve scaled the giants to make this work.

7. The Skystones minigame will return across all versions in a new and improved form, although it wasn’t shown in our demonstration. It’s here that the villains captured in your traps in last year’s Trap Team game will come into play. They will give you a unique Skystones to play, and new elemental attacks.

8. One of the big new non-Skylander characters is soft-spoken genie-like dude Ukko. His role wasn’t clear, but he appears to be a person of significance in the Cloud Kingdom – perhaps even the king – who is being directly helped by the supercharged Skylanders as they fight back against Kaos and his sky-eating Doomstation of Ultimate Destruction.

9. It is possible to call in air support while in combat in an air-based vehicle. It was not made clear how deep this mechanic goes and how much it is ingrained into the gameplay, but I got the impression there was a charging up (or cooldown) involved.

10. While we are on the subject of cars, it is worth noting that those old characters that have been supercharged for the new game will be paired with their own vehicle, and that vehicle will be themed to the character. Paring the right character with the right vehicle gives the ride some seriously cool extra firepower, so it’s worth making the match. The one mentioned in the demonstration was a Goblin and a Hovercraft. Is this Lob Goblin I wonder?

11. The iPad version of Trap Team did not knock it out of the park, but sales were strong and Activision believe it to be a huge growth platform for the game and will push on with a new iPad version to tie-in with SuperChargers. It will be the same as the console game, and not an alternate version as we’ll see on the Wii and 3DS.

12. What other characters and vehicles will be in the game? I got no official confirmation, but I am led to believe that we might be seeing Super Shot Stealth Elf piloting a supercharged helicopter. There was also the mention of a goblin character paired with a Hovercraft. We also know that the Dive Bomber is paired with a character called Dive-Clops, which was not revealed during the demo. Watch this space…

13. The demonstration room included one of the biggest TVs you’re ever likely to see and a solid surround-sound system The latter did an excellent job of showing off the detail in the sound effects, and I was impressed by the in-game audio. Especially during the big water-based boss battle, where the screen was full of activity, in my ears it was all crystal clear, dynamic and immersive.

14. The new vehicle figures feature mild articulation, so kids can move the parts around for a bit of added fun. The submarine revealed, called Dive Bomber, had rotatable propeller blades, for example. However, we were warned that it wasn’t waterproof and you’d be ill-advised to let your child throw it in the bath.

15. When the first Skylanders went big, Activision laid out a five-year plan for the series, and always viewed SuperChargers as the biggest of the bunch. The series has been heading to this point all along it seems.

16. You do not need to buy the starter pack to be able to play the game. Is that the sound of parents’ cheering? You will be able to download the base game – for a cheaper price – that simply uses last year’s portal to enable play. This will, of course, leave you without a vehicle figurine from the start, which raises its own questions. See below.

One question that does bug me and is as yet answered by Activision is; how much of Sylanders: SuperChargers’ gameplay will be vehicle-based? Considering the investment in the toys and what would have been required from a development perspective to get them playing in-game, we can anticipate it will be substantial. What would be the point of creating this huge new addition and then gating it off into just a small percentage of the gameplay? And along that same thought pattern, would you not also need to make sure there is a good mix of all three types – land, sea and plane? Especially since you need to convince a consumer to fork out for the sea and plane not included in the starter pack.

Skylanders has always walked a fine line between balancing the need to satisfy the gamer and sell figurines and I’m concerned that players who only own the one vehicle – or indeed no vehicles if they download the game and use the existing portal – will feel short-changed or led into a purchase they may not necessarily want to make. It’s a concern and nothing more, and one I anticipate Activision proving or debunking sooner rather than later. 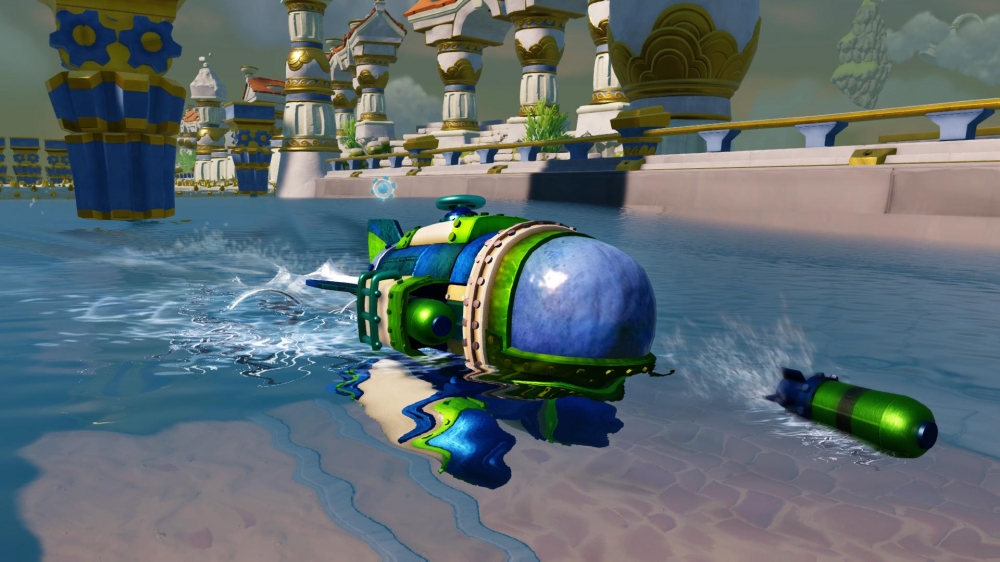